Colonel Wallace Talbott found a Spanish map in the Archives of the library in Jefferson City, Missouri that shows a large cave marked north of Gravois Mills. It may have been Jacob’s Cave the Spanish mapped and it may not, but there are no other large caves known in the area. If indeed Jacob’s Cave was the cave on the Spanish map, the entrance had become closed before the area became settled.

According to The Goodspeed Publishing Company’s 1889 History of Cole, Monheau, Morgan, Benton, Miller, Marks and Osage Counties, Jacob’s Cave was discovered in 1875 by a lead and tiff miner, named Jacob Craycraft. 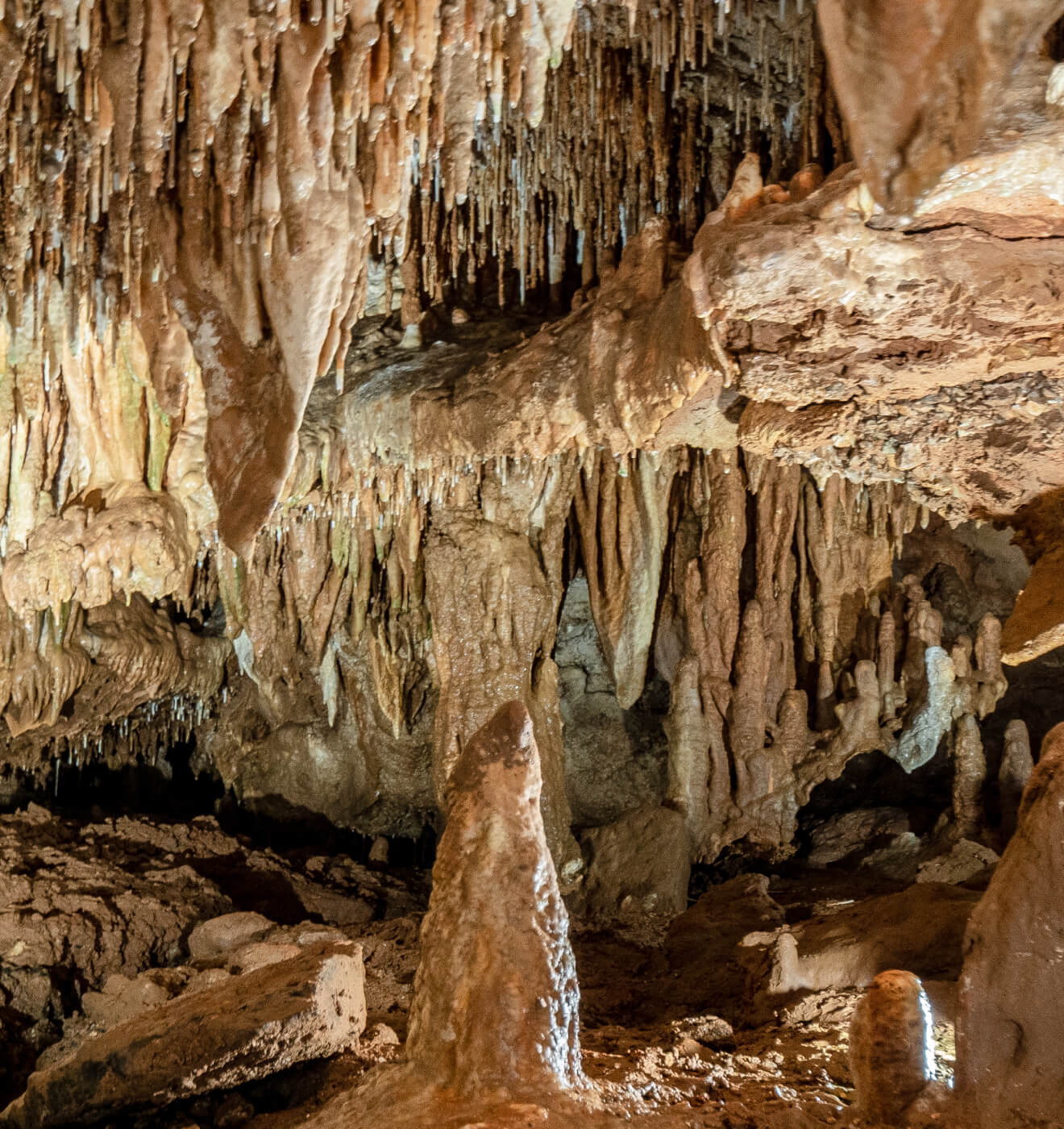 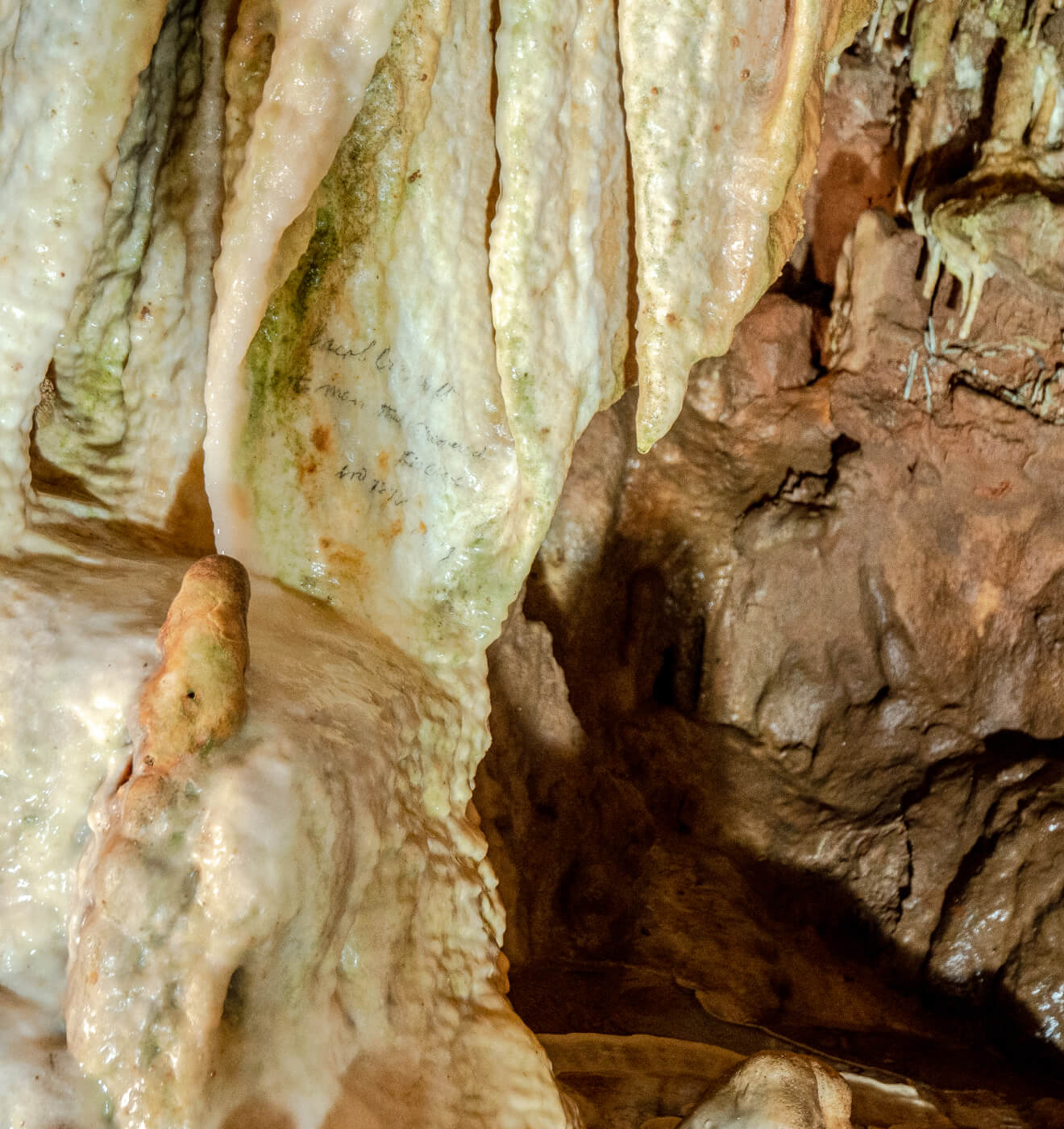 Jacob Craycraft came to this area from Kentucky with his miner father and a brother as a small boy. As the story goes, Jacob was prospecting for a new vein of mineral by digging along a fault line just East of the present day entrance to the cave. He, two other men and a six year old boy were eating their noon lunch and began throwing rocks at an animal hole. A larger rock was rolled in and landed with a “thunk”. Their curiosity was aroused and the men then dug a larger hole into what we now call the “old entrance” to Jacob’s Cave. The next day, Jacob explored 1/2 mile of the cave and autographed a cave formation with, “Jacob Craycraft, the man who discovered this cave, 1875 August 9th”. This signature is shown as part of the present day cave tour. His signature has been found in three other places in the cave.

At one time, Jacob’s Cave extended over the present day parking lot of the cave. The collapse of the roof blocked up the present opening of the cave, trapping the water in the cave. This water found a new way out to the surface and dissolved out a new entrance to Jacob’s Cave, which is now called the “old entrance” because it is the entrance found by Jacob Craycraft on August 8, 1875.
It has been said that Jacob Craycraft owned the property overlying the cave. His name does not appear on any abstract of the property so we know he never owned the property. But beginning in 1932, he did give tours of the property for the high price of 25 cents per admission. Jacob also dug exploring pits in what is now called the first room of the cave. Some of the pits are 20 feet deep. Evidently, the digging in the red clay was very difficult and very little mineral was found. Since the cave tours were not very profitable, Jacob soon moved his exploring to a richer area. 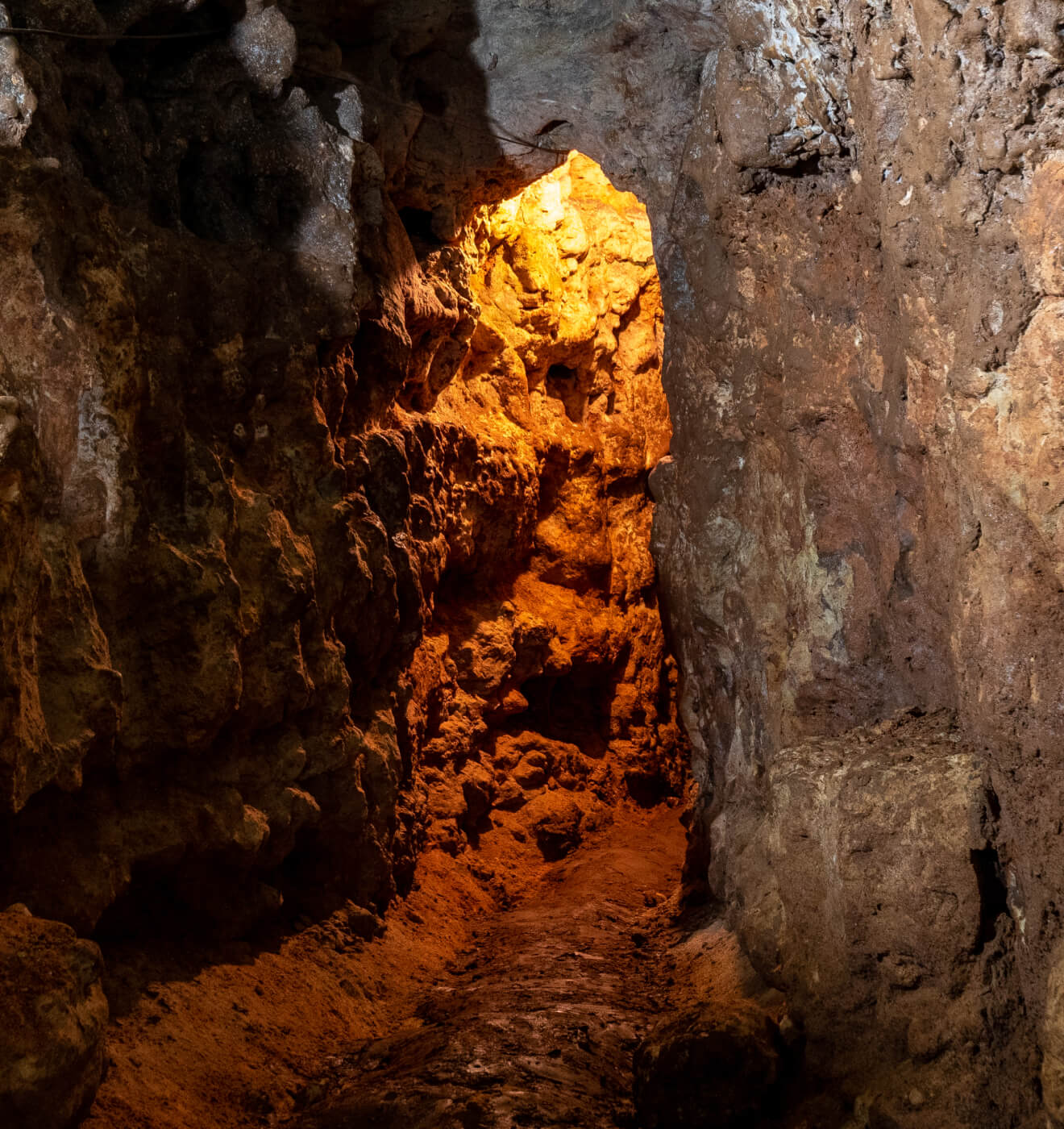 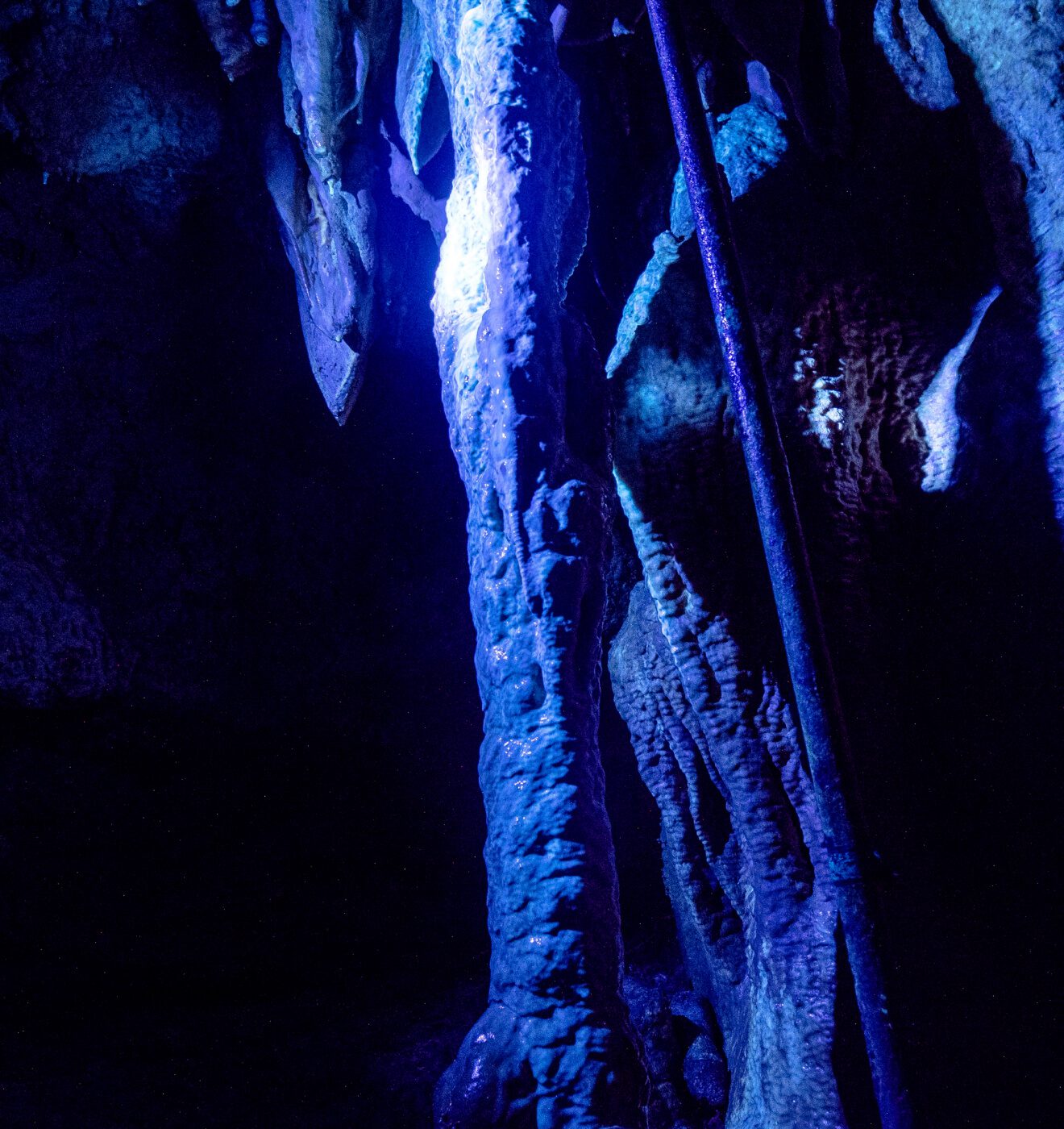 The original Highway 5 was located just to the East of the cave in the 1930’s and a road was built to the cave opening. The area became a popular place for picnics and Sunday outings. Families came some distance by horse and buggy to visit and picnic at Jacob’s Cave.
Jacob’s Cave was the first commercialized cave in the Lake of the Ozarks area and was opened for tourists in 1932. At that time wooden planks were used for walkways and kerosene lanterns for light. Since then, it has been equipped with level concrete sidewalks and electrical lighting…all to accommodate wheelchairs and strollers throughout the entire tour.
In the mid 1940’s, Gravois Mills became the Lake of the Ozarks “hot spot”. Russell Hall purchased the cave in 1947 to develop a show cave. In the spring of 1950 the cave, now with concrete walkways and modern cave lighting was again opened to tourists. Mr. Hall went to considerable expense to develop the cave and used explosive experts from Kansas City and the expertise of lighting engineers from Co-Mo Electric of Tipton, Missouri. Jacob’s Cave was an instant success. A neon sign at the highway welcomed tourists as late as midnight.

Ownership changed hands several times until Frank Hurley bought the cave in 1965, the same year as the present day Highway 5 opened for travel. In 1982, the Gift and Rock Shop and the entrance to Jacob’s cave burned and a new and larger two-story building was erected at the entrance to the cave. Jacob’s Cave today is one of the best show caves for access and lighting and the only Missouri cave that is TOTALLY accessible by wheelchair. Jacob’s Cave is located between Versailles and Gravois Mills off Missouri Highway 5, on State Road TT.
Jacob’s Cave is almost older than history itself. It has been known to man for 139 years and has been available to be viewed by the public for 82 years. The Hurley Family have been custodians of God’s creation for 49 years. 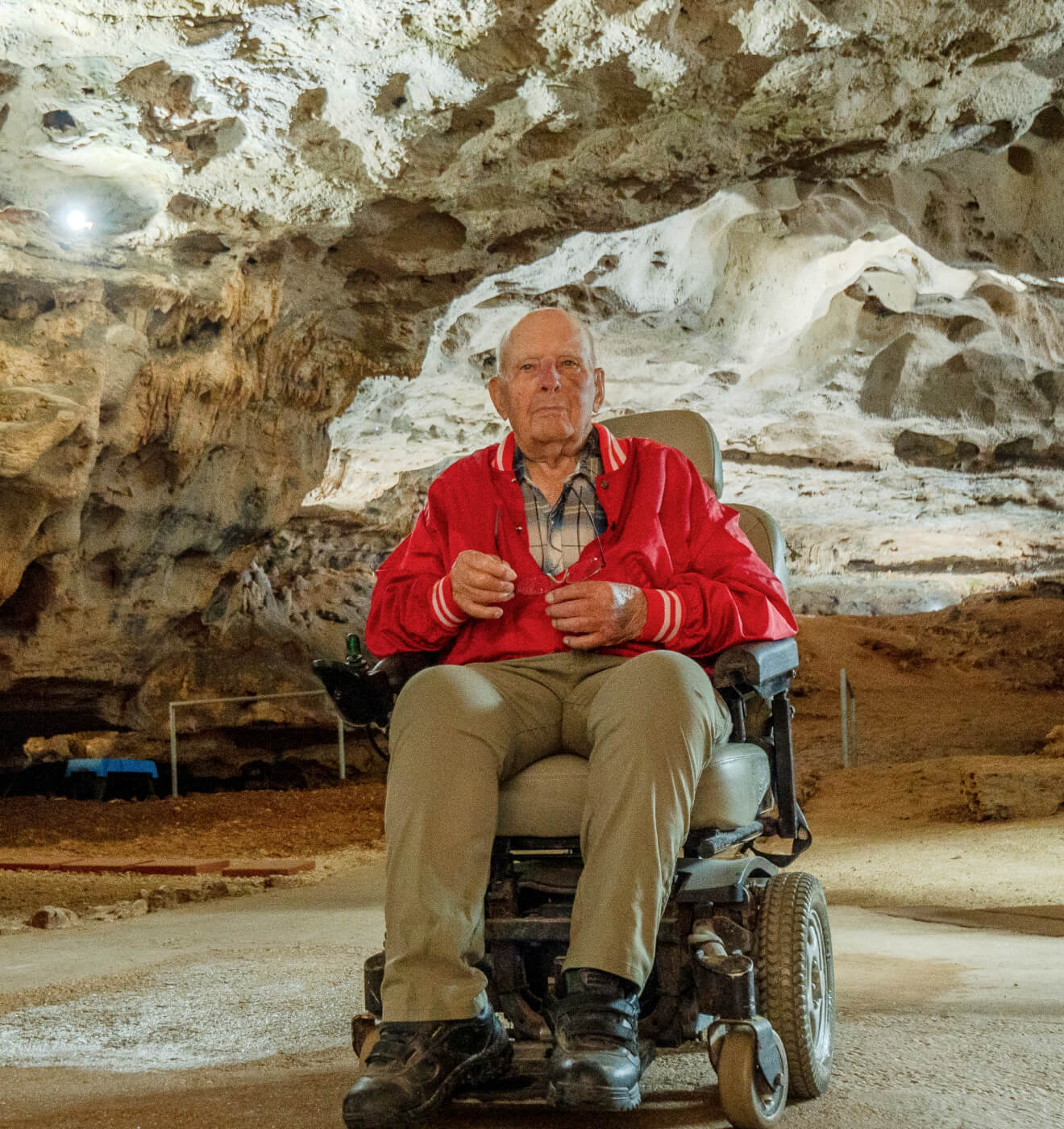